did some work on the Paddy Wagon myself, but quickly learned I did not have the tools and ability to complete the project. I had bought a pipe bender to create the C cab look. I used square tubing but the dye I had was for round tubing and it caused a kink on the edge. I did get a good form for the cab based on the pattern that my wife Chuan made for me.

I found North Texas Customs through a friend of mine and turned it over to them. Here are some pictures bringing up to date on the project. 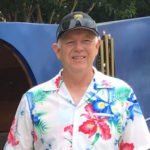 5 Trust in the LORD with all your heart and lean not on your own understanding;

6 in all your ways acknowledge Him, and He will make your paths straight.